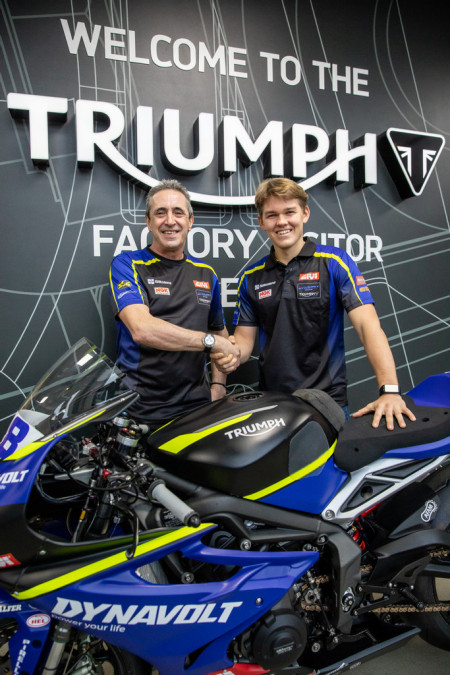 Dynavolt Triumph are delighted to announce they have secured the services of Hannes Soomer to contest the World Supersport Championship in 2022.

Hannes, who won the European Supersport Championship in 2017, will join the Dynavolt Triumph team as they make their return to the world arena following the overhaul of the FIM Supersport regulations using the Balance of Performance system.

In the same year, Soomer made his debut in World Supersport for three rounds of the campaign. In 2017 Hannes took part in the European WorldSSP championship and, with 28 points overall, was crowned champion of the class. Soomer advanced to his first full season in WorldSSP the following year and soon became a regular points scorer. Further progress was made in 2019 with multiple top ten finishes, enough to earn him a move to Kallio Racing for 2020 where he ended the season with three podiums from the last four races.  2021 was a leaner year results wise for the likeable ‘Baltic Bullet’ and he now embarks on his fifth full season in the World Supersport class with the UK based official factory Triumph team.

Hannes Soomer: “I am very happy to join the Dynavolt Triumph team for the 2022 season. I truly believe in the bike’s potential and the team’s experience and am sure we can find a good way to work quickly. This year will present some new challenges with the new regulations which makes it very unpredictable and interesting. I can only say we will give it our all and I can’t wait to start testing and really working for the season ahead.”

Dynavolt Triumph Team Manager Simon Buckmaster: “We are really pleased to announce that we have come to an agreement with Hannes Soomer for our official Dynavolt Triumph team. To be honest I’ve been watching Hannes’ progress in recent years and have spoken to him the last couple of seasons about the possibility of signing for our team so I’m pleased that for this year we’ve been able to make an agreement together.  Hannes has already had podiums in 2020. Last year he broke his leg early in the season and came back impressively from that. I believe the potential is there, he has the experience and he believes in our team and the Triumph project. We are excited to get started with testing and looking forward to the early part of the championship. Our aim must be to challenge towards the front and ultimately for the podiums and the title. I think he is going to surprise a few people - not everybody because there are a few of us who realise his talent - but he is going to be a surprise. I’m really looking forward to it.”